Ismail Pomiès, Senior Fund Manager at AXYS Investment Partners, shares his perspectives on the AXIOM Africa Equity Fund, which was launched in Mauritius in 2020 to provide investors with a pan-African equity exposure while benefiting from the two megatrends of the Digital Revolution and the Demographic Boom. He believes that the long-term outlook for Africa is promising and highlights that linguistic, historical and cultural ties have allowed Mauritian companies to build strong networks with their African partners. 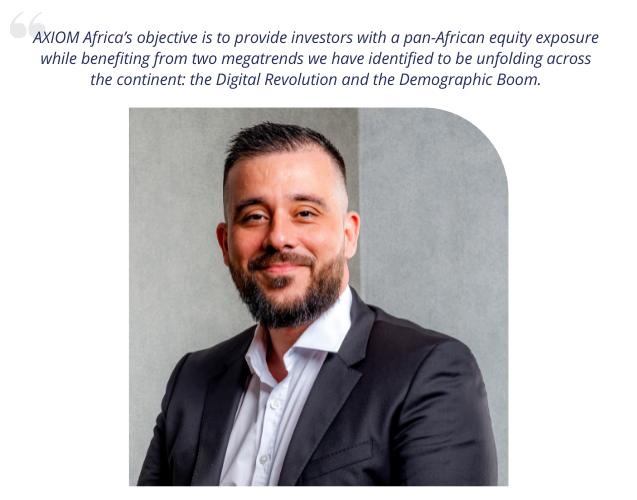 The AXIOM Africa Equity Fund was launched in September 2020. What was the rationale behind the launch of the Fund?

AXIOM Africa Equity Fund was launched during the pandemic in 2020, at a time where, presumably due to the arrival of vaccines, investors were becoming optimistic about the global economic outlook and stock markets were starting to perform again. For Africa specifically, it was good timing since most of the local stock indices were still in in the pandemic-induced doldrums, while at the same time leading Developed Markets were almost back at their pre-pandemic levels. Since then, African stock markets have generated strong performances beating their Emerging Markets peers by almost 8% in USD terms during the period ending September 2021.

Apart from a couple of exceptions such as South Africa or Egypt that are traditionally part of Emerging Market indices, African listed equities as an asset class have been largely ignored by international investors over the years. The rationale behind the launch of AXIOM Africa Equity Fund was to bridge the gap by offering investors a dedicated pan-African fund that seeks to benefit from the two megatrends unfolding in the region that we consider historic in nature: the Digital Revolution and the Demographic Boom.

AXYS is one of the oldest financial market players in Mauritius with its origins dating back to 1992. It offers Discretionary and Advisory Portfolio Management, Fund Management and a whole suite of other Investment Solutions, aside from Stock Broking and Corporate Finance. AXYS Investment Partner is licensed as a CIS Manager and Investment Adviser (Unrestricted) by the FSC, and is the Fund Manager of AXIOM Africa Equity Fund. The Fund is itself authorized and licensed as a Collective Investment Scheme by the FSC.

What can you tell us about the Fund’s investment strategy?

AXIOM Africa’s objective is to provide investors with a pan-African equity exposure while benefiting from two megatrends we have identified to be unfolding across the continent: the Digital Revolution and the Demographic Boom.

One of the main investor concerns has, over the years, been the risk inherent to the African equity asset class. The challenge for us was to design a robust investment strategy that properly assesses macro risks such as currency, interest rate or political risks, while optimally allocating capital across the continent by exploiting the extraordinary diversification potential offered by Africa. AXIOM Africa Equity Fund, through its Manager’s disciplined in-house investment approach, has been able to significantly reduce the investment risk undertaken since its inception. If we consider volatility as a risk proxy, AXIOM Africa Equity Fund has had, since its inception till end of September 2021, an annualised volatility of 9.33% in USD terms, which is just half the risk generated by traditional Developed Markets or Emerging Markets indices during the same period.

Risk management is a cornerstone of our capital allocation process. We strongly believe that a benchmark-agnostic approach, coupled with a disciplined country-allocation process, enable us to optimally extract the return potential offered by those African stocks that are expected to benefit from the aforementioned structural regional changes.

What kind of investments has the Fund been making during its first year of operation and how would you describe the Fund’s performance to date?

The pandemic has been terrible for all of us, but like many crises, it has been the occasion for some forces to emerge strongly. The Digital Revolution we observe in Africa and especially into the digital payment space has been significantly boosted by the pandemic; some African companies, which are actual world leaders in that space, have performed strongly. Going back to the early 2000’s, most customers in African countries have been using telecom credit for cash transfer. Mobile money was really born here in Africa. The African pioneers in the Telecom sectors, such as M-Pesa/Safaricom in Eastern Africa or in the digital payment solution space such HPS or Fawry in Northern Africa, have improved significantly and adapted their technologies to the local contexts over the years, making them international leaders in their respective fields and markets. The lack of ‘physical’ banking infrastructure, which was considered a weakness for some investors over the years turned out in fact to be a strong competitive advantage during the pandemic, strengthening the leadership of some African companies in the digital space. Early adoption of the technology by African customers has been faster than other regions.

AXIOM Africa Equity Fund, which has been calibrated to benefit from the Digital Revolution and the Demographic Boom unfolding on the continent, has been investing in those companies since its inception. At the end of last September, the fund’s performance reached +24.48% in USD terms with an annualised volatility of 9.33%, reflecting a good risk adjusted performance of the fund’s investments.

What are some of the key trends that you are observing currently?

The most important trends we observe here in Africa are the Digital Revolution and the Demographic Boom. From an investment standpoint, these trends are probably comparable to the Industrial Revolution of the 18th - 19th century in the Western countries.

Africa is a heterogeneous group of 54 countries with a rich and broad cultural diversity, making the continent a fascinating place. In such a context, it is difficult for global companies to address the domestic demand within these countries. We believe that domestic companies are best positioned to understand and address the local demand, especially if digital tools are implemented efficiently. Those domestic companies which are the most efficient are expected to benefit from these secular trends. We scrutinize the continent searching such listed companies, that are run efficiently and which use digital tools diligently to reach a fast-growing customer base.

How do you see the investment potential in Africa, and the role of Mauritius in facilitating investments in the region?

Mauritius enjoys a very special place here in Africa. Stable and strong institutions make Mauritius appealing as a regional investment centre. Historical and cultural ties between Mauritius with Asia, Europe and Africa are a strong competitive advantage. Among many other things, Mauritius is one of very rare countries where French and English are spoken languages, which facilitates engaging into business relationships with any African regions from Mauritius. Based on these advantages, Mauritian companies have built a strong network with their African partners. Through regional networks and other different channels, we can observe the evolution of customer habits, local trends and get information from the ground which can be more difficult to obtain from other parts of the world.

How do you see the long-term outlook for the African region?

The long-term outlook for Africa is promising. The Digital Revolution coupled with the Demographic Boom unfolding in Africa represent an historic opportunity for investors. According to the United Nations Department of Economic and Social Affairs, Africa will dominate the global population dynamic over the next 80 years. Over that period, the population living in Africa is expected to triple from 1.5 billion to 4.3 billion people. While at the same time, the world population is expected to increase by 38% from 7.9 billion to 10.9 billion.

We believe that Digitalisation will act as a catalyst unlocking value from African assets, supporting growth in an efficient manner and creating future opportunities for local companies that are ready to embrace the Digital Revolution.