Spotlight on succession planning in Africa

The next generation of African entrepreneurs could lead to a maturing of the continent's family office sector, explain Ocorian Directors, John Félicité and Kenny Curpen, and Mauritius, as a recognised international financial centre with a stable and sophisticated legal and economic ecosystem, is well placed to succeed as a family office destination. 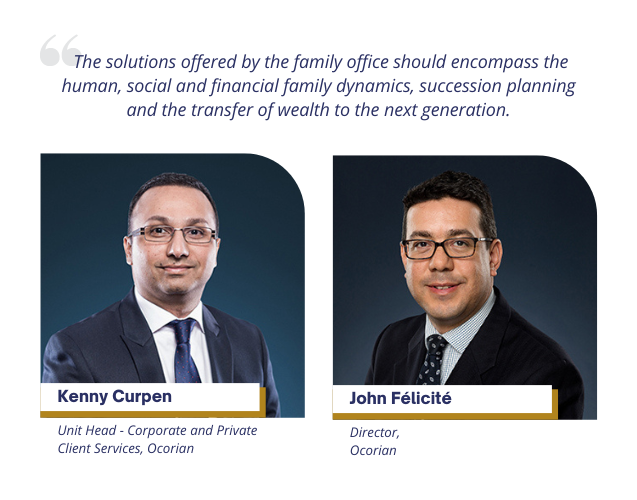 In a continent still heavily influenced by traditional values and customs, succession planning is not a priority in many African societies. Yet most African enterprises are family-owned and so second-generation entrepreneurs are critical to the continuation of the business. However, what those entrepreneurs bring to the business depends on their ability to influence the decision making of the parent founder, who is often reluctant to cede control of the business and wealth they built.

An industrious generation intent on growth

Irrespective of whether the second-generation entrepreneur wants to join the family business or create a new one, they form the backbone of small and medium sized enterprise investment in Africa. Many of those emerging entrepreneurs are using the knowledge gained overseas through education and work experience to bring new ideas, modern management practices and an appetite for intra-African trade back to the continent. They are seeking to create jobs, reduce inequality, foster education and create sound economic growth for their respective countries. Running parallel to this prosperity comes the question of wealth preservation and succession planning.

Planning for the future

Unlike many of the founders of established family businesses on the continent, today’s second-generation entrepreneurs are showing increased willingness to structure their wealth with succession planning in mind. They are seeking vehicles and structuring solutions not only for their initial investments, but also as a means to attract foreign investment from eventual partners.

Considering the prevalence of family-owned businesses across the continent, family offices are well placed to facilitate the protection and transmission of wealth. They allow wealth created in Africa to be reinvested in Africa and provide a more customised offering than private banks and wealth managers. However, although the continent's new and successful entrepreneurs tend to favour structuring their wealth in local jurisdictions, the concept of a family office is reasonably new in Africa.

Is Africa ready to accept the concept of family office?

There are over 6,200 multi-millionaires in Africa (US$10 million+) and the total private wealth held there is expected to rise by 30%, reaching USD 2.6 trillion by 2030. As a result, family offices are expected to rise in popularity on the continent.[1] Whether next-generation entrepreneurs effectively begin their own family office or simply create bespoke structures for specific investment projects will depend on a number of factors including the intended investment period, the location of investments and their perceived risk. What matters is to have a holistic view of the situation. The solutions offered by the family office should encompass the human, social and financial family dynamics, succession planning and the transfer of wealth to the next generation.

For prospective family office clients wishing to use a local African solution, Mauritius is an attractive proposition. Although it will take some time for Mauritius to be recognised as a family office destination to the same tune as established wealth management jurisdictions such as Jersey or Switzerland, it is well placed to succeed.

Mauritius is a recognised international financial centre with a stable and sophisticated legal and economic ecosystem. Critically for family office clients, it is highly regarded for its risk mitigation whilst its proximity to the continent helps facilitate regular contact between clients and their service providers. It also ranked first in Africa and 13th worldwide in the World Bank's 2020 Ease of Doing Business Report, setting it apart as Africa’s go-to jurisdiction for high net worth individuals wanting to keep their wealth operations on the continent.